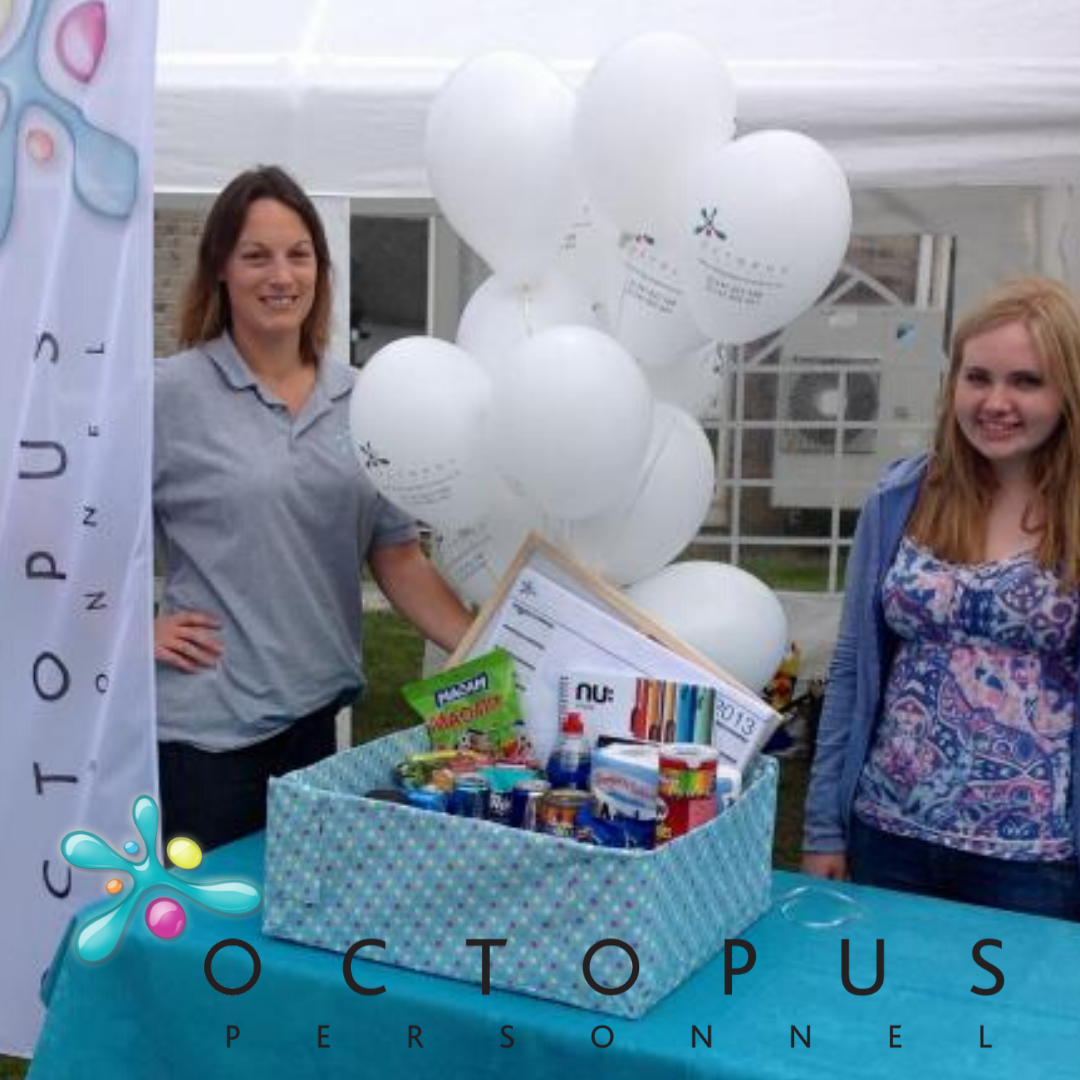 The Octopus Personnel team from Bournemouth had a great day at Bournemouth University Fresher’s Fair on Saturday 28th September. The rain held off which was an added bonus.

The team were there to sign up students for work opportunities while they are studying over the next two or three years. There was an added incentive; the opportunity to win a Students Survival Box of goodies which included must-have items like beans, pringles, washing up liquid and of course an alarm clock.

Amy Davies (19) is studying Archaeological, anthropological and forensic sciences were delighted to receive the news that she had won the raffle and came back to the campus to pick up her box of goodies from Vickie Hopwood who is heading up the new Octopus Personnel office in Bournemouth.

The story of Octopus Personnel – An Unexpected Journey

An Unexpected Journey Wow, what was I thinking 15 years ago? We were rapidly heading for a recession, and I…

Ain’t no party like an Octopus party. We are celebrating 15 years of Octopus Personnel this month and to celebrate…

Here is our 2021 Video Advent Calendar full of our favourite Octopus moments from this year. We hope you enjoy…

The Jobsmobile at the Job Fair in Sturminster Newton

On Thursday 21st October, The Jobsmobile took its first outing to The Job Fair at The Exchange in Sturminster Newton….

Ready, Steady, Bake! The team at Octopus Personnel never need much of an excuse to get their whisks at the…

Get to know the newly appointed Recruitment Office Manager

Lucie talks about work/life balance, her inspiration being a Recruitment Consultant and her new role as Office Manager at Octopus…

Greetings from the North Pole Christmas time is here again! That means it is time for me to move in…

On Top of the World

Congratulations to Rosemary Burbidge who won our free competition at The Gillingham & Shaftesbury show this year. She was the…

Sunday 13th April saw the annual children’s day at Wincanton Racecourse and what a glorious day for it! The days…

Some of the Octopus Team are at Yeovil College this evening at the Apprenticeship Recruitment Event. The event is open…

Up, up and away! For the first time in a few years, we were able to leave our wellies and…

Its that time of year again! Hopefully, we won’t need our wellies this year We are looking forward to seeing…

Following a demanding assessment process, we were recently delighted to receive confirmation that we had been awarded a Gangmasters Licence…

Winner Of Our Balloon Race

Aden Ottewill was the owner of the winning balloon in our balloon race. His balloon travelled an impressive 238 miles….

How excited were we this morning to have received an email with knowledge of one of our balloons whereabouts. The…

Recruitment is about people and finding the right person for the right job. If you want to meet a team…