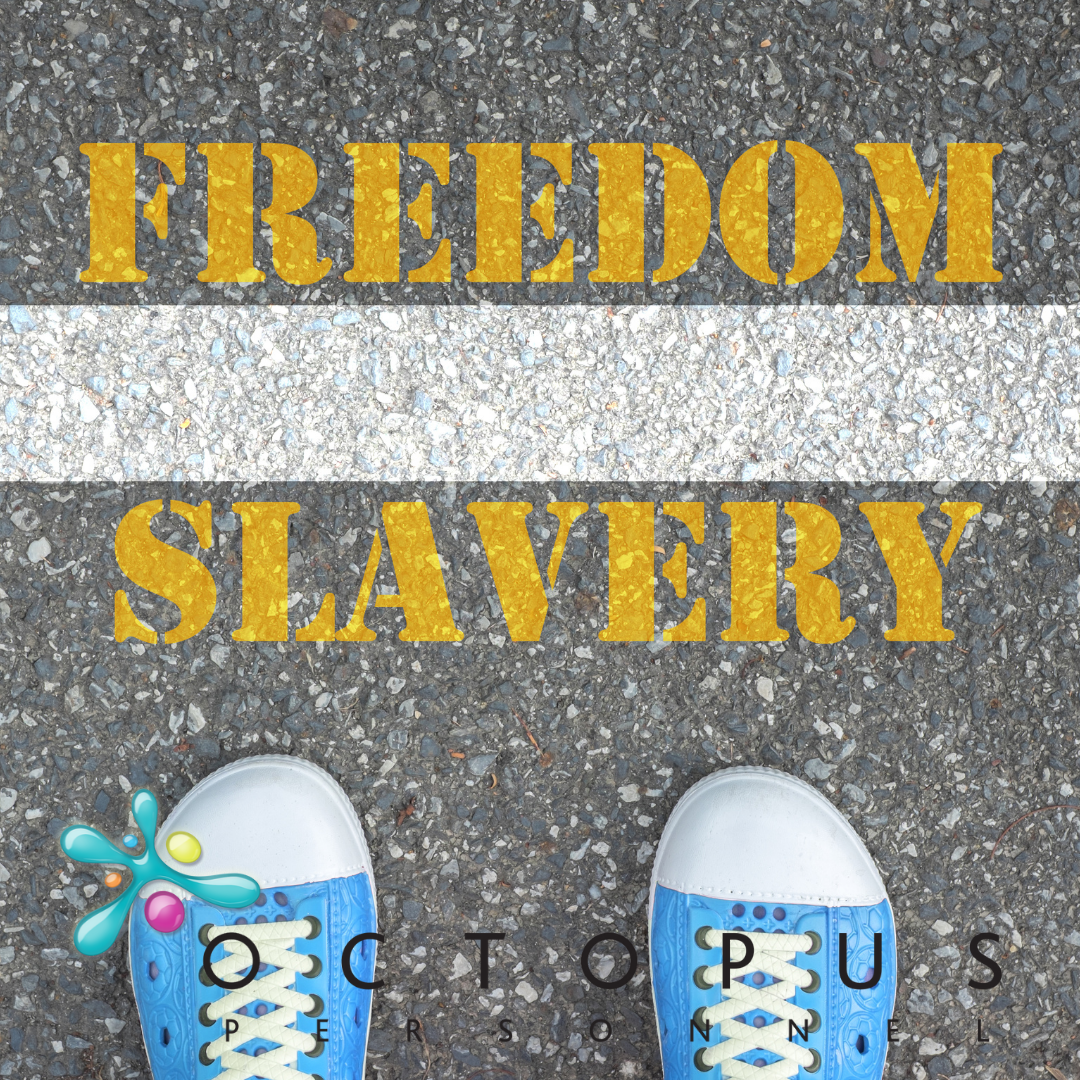 Octopus Personnel is committed to helping prevent and eradicate modern slavery, protecting the rights of the most vulnerable

Whilst Covid-19 has had a profound impact on the world, it has not affected everyone equally.  For people who are enslaved or vulnerable to slavery, the economic and social disruption caused by the Covid-19 pandemic is affecting their lives in new and profound ways.   Whilst the economics of slavery go some way to explaining why it remains such a challenging problem to eradicate, there are things which can be done to help those affected.

Globally, slavery generates as much as $150bn (£116bn) in profits every year.  Shockingly, more than one third of which ($46.9bn) is generated in developed countries, including the European Union.

According to slavery expert Siddharth Kara, modern slave traders now earn up to 30 times more than their 18th and 19th century counterparts would have done. The one-off cost of a slave today is $450, Kara estimates. A forced labourer generates roughly $8,000 in annual profit (6,142.80 Pounds Sterling) for their exploiter, while sex traffickers earn an average of $36,000 (27,628.02 Pounds Sterling) per victim.

Two centuries ago, slave traders were forced to contend with costly journeys and high mortality rates; modern exploiters have lower overheads thanks to huge advances in technology and transportation. Ongoing issues with modern migration flows and government policies also mean that a large supply of vulnerable, exploitable people are easily accessible, and can be drawn into global supply chains in the agriculture, beauty, fashion and sex industries.

What do modern slaves do?

Slavery is an umbrella term for activities involved when one person obtains or holds another person in compelled service.  Of the 24.9 million people trapped in forced labour, the majority (16 million) work in the private sector. Slaves clean houses and flats; produce the clothes we wear; pick the fruit and vegetables we eat; trawl the seas for the shrimp on our restaurant plates; dig for the minerals used in our smartphones, makeup and electric cars; and work on construction jobs building infrastructure for the 2022 Qatar World Cup.

Women and girls bear the brunt of these statistics, comprising 99% of all victims in the commercial sex industry, and 58% in other sectors, according to the ILO.

Someone is in slavery if they are:

The following definitions are encompassed within the term ‘modern slavery’ for the purposes of the Modern Slavery Act 2015.

For further information please refer to the Modern Slavery Act 2015.

How has the pandemic increased the risks to vulnerable people?

1. For children and young people, social isolation may increase their vulnerability to grooming and abuse.

2. Lockdowns to halt the spread of the virus have led to mass layoffs as many global brands have cancelled orders and factories have been required to shut down. The garment industry has been particularly badly affected: by late March over one million workers in Bangladesh had been laid off or temporarily suspended.

3. Migrant workers returning home due to coronavirus restrictions are at great risk of infection when travelling on crowded public transport, stuck at borders or other bottlenecks where physical distancing is all but impossible.

4. In the UK, many are often too scared to reach out to authorities, even when they are in dire need of accessing essential support, such as healthcare. They fear being criminalised and detained, rather than being protected as a victim of crime.

5. Coronavirus lockdowns across the world have limited the operations of anti-slavery organisations.

Is slavery still a problem in the UK?

Even though most people think that slavery only exists overseas, modern slavery in the UK is thriving. The British Government estimates that tens of thousands of people are in modern slavery in the UK today.  Most people are trafficked into the UK from overseas, but there is also a significant number of British nationals in slavery. The most common countries of origin are Albania, Vietnam, Nigeria, Romania and Poland.

What does Octopus Personnel do to prevent modern slavery?

At Octopus Personnel, we committed to eliminating the exploitation of people under the Modern Slavery Act 2015 (the Act).   In order to assess the risk of modern slavery, we use the following processes with our clients:

Many businesses are not equipped to tackle the risk of modern slavery. Supply chain risks are characterised by groups vulnerable to labour exploitation including migrant workers undertaking unskilled or irregular work; young people and unskilled or illiterate workers and displaced people and by the use of third party labour providers for recruitment and employment. Effective strategies to tackle the risk of modern slavery require: a good understanding of where risks lie in the supply chain; an action plan to tackle those risks; remediation policies and effective monitoring and reporting.

When engaging with our clients, we ask for evidence of their processes and policies, including commitments around modern slavery, human trafficking, forced labour, human rights and whistle-blowing.  Octopus Personnel confirms with all our clients that no child labour will be used.

After due consideration, we have not identified any significant risks of modern slavery, forced labour, or human trafficking in our supply chain or with our clients. However, we continue to be alert to the potential for problems.

Additionally, we have taken the following steps to minimise the possibility of any problems:

Our staff are encouraged to bring any concerns they have to the attention of management.

What do I do if I think someone is a victim of modern slavery?

According to Anti-Slavery International, slavery is so common that it is possible you come across victims “on a regular basis”. Key things to look out for are whether the person has freedom of movement; appears scared, withdrawn or shows signs of abuse; has few personal belongings or identifying documents with them; or seems under the control of someone else and scared to talk.

If you think someone may be vulnerable or a victim or modern slavery, it is best to contact authorities directly instead of approaching the person, as approaching them could put them in danger.

In the UK, you can contact the Modern Slavery Helpline on 08000 121 700, the police, Crimestoppers or groups such as Anti-Slavery International.

With Ash on Their Faces: Yezidi Women and the Islamic State Cathy Otten

Here to support you

At Octopus Personnel, the recruitment team are experts at presenting our candidates to ensure the employer is able to see all the skills and experience you are bringing to a role, and preparing you to succeed at interview. Years of industry expertise and outstanding relationships with our clients, and grasp of the needs of their business, means we are perfectly positioned within the market to guide you to your new role. You can sign up here or call the office on 01747 825568 to arrange an interview.

Modern slavery can take many forms including the trafficking of people, forced labour, servitude and slavery. As a recruitment agency… 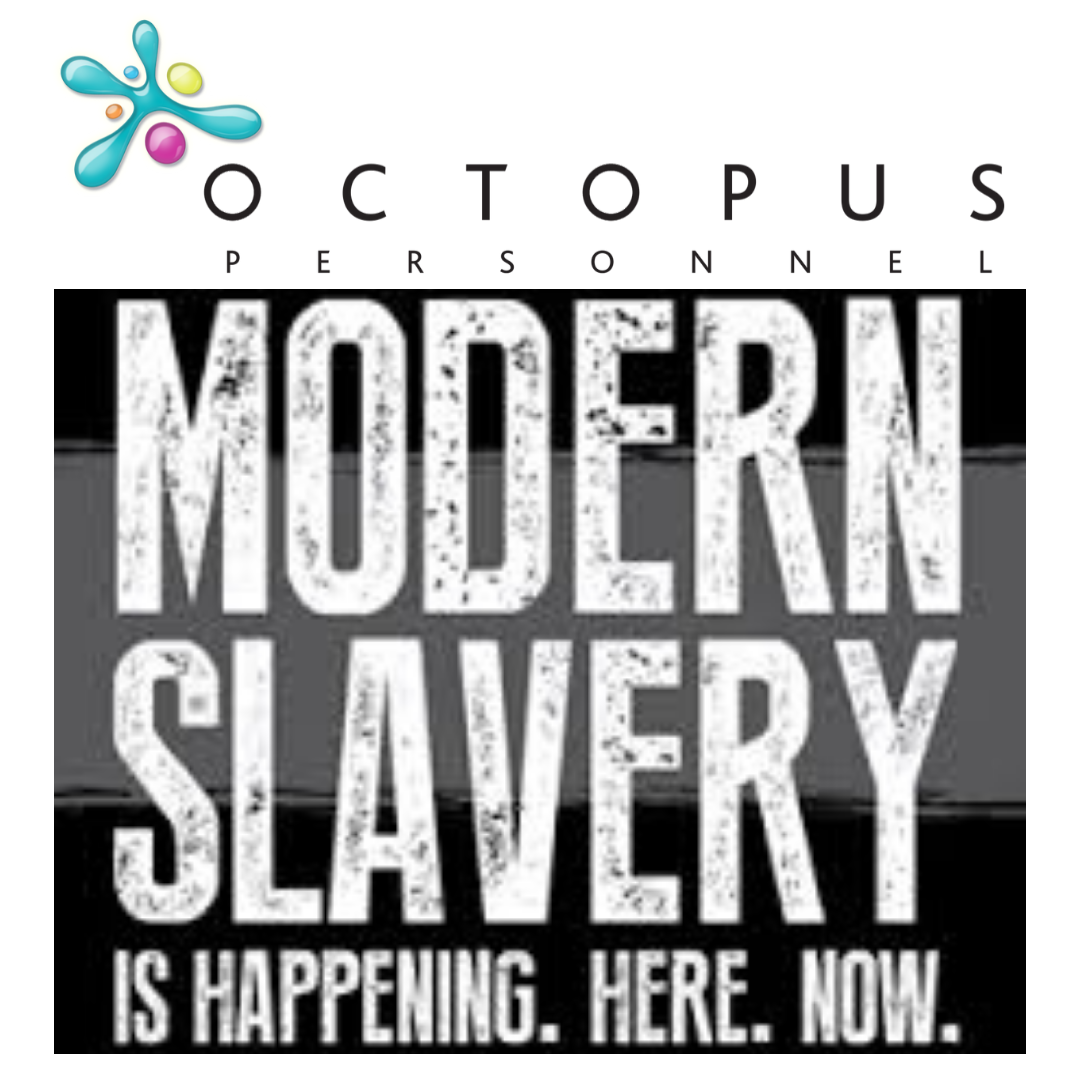 Modern slavery can take many forms including the trafficking of people, forced labour, servitude and slavery.

As a recruitment agency we need to be very alert to the signs of exploitation and make all the relevant checks on all workers registering with us. The main sectors affected include, but are not limited to are; agriculture, food processing, fisheries, construction, manufacturing and the hospitality industry.

Anyone can become a victim of modern slavery. In some cases Eastern European men and women are promised a job in the UK and fid that they are forced by their traffickers to work for little or no pay. Through threat, violence or coercion victims may be forced to live in squalid accommodation and have their identity documents taken from them.

Legal documents – is the person in possession of their legal documents (passport, identification and have their own bank account details) or are these being held by someone else? Victims will often be forced to use false or forced identity documents.

Right to work – Is the person legally able to work in the UK? Ensure appropriate checks are made on all workers.

Shared occupancy – Check the names and addresses of worker. A high number of people listing the same address may indicate shared occupancy, often assign of exploitation.

Appearance – Does the person look malnourished, unkempt, or appear withdrawn? Are they suffering physical injuries? Do they have few personal possessions and often wear the same clothes? What clothes they do wear may not be suitable for their work.

Behaviour – Is the person withdrawn or appear frightened, unable to answer questions directed at them or speak for themselves and/or an accompanying third party speaks for them? If they do speak, are they inconsistent in the information they provide, including basic facts such as the address where they live? Do they appear under the control/influence of others and rarely interact with colleagues?

Medical care – Does the person have old or serious untreated injuries? Have they delayed seeing a healthcare professional, and are they vague, reluctant or inconsistent in explaining how the injury occurred?

Fear of authorities – Is the person afraid of the police, immigration, and the tax office? Are they scared of removal or what might happen to their families?

Debt bondage – Does the victim perceive themselves to be in debt to someone else or in a situation of dependence?

If you have any questions please call and speak to Sandra.

Octopus Personnel is committed to helping prevent and eradicate modern slavery, protecting the rights of the most vulnerable Whilst Covid-19…